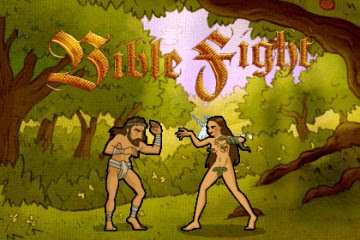 The game, which incorporates the style of the video game Mortal Kombat, features God, Eve, Noah, Moses, Mary, Satan, and Jesus, who "battle' it out to determine who is the "mightiest" of scripture characters. When one of the characters is injured, blood splatters off of them.

The intro to the game reads: "(Holy music) In the beginning, there was a contest of strength amongst the most prominent figures in scripture to determine the mightiest. The tale of this great rivalry was thought lost forever. Until now."

Once you've chosen a character for battle and continue to the arena, one of which is 'The Garden of Eden', the fight begins. The character Eve, for example, is scantily covered in leaves and detailed to be an 'attractive' female figure. Jesus' mother Mary holds baby Jesus while she uses her halo as a weapon, so on and so forth. The game is considered blasphemous, and an insult to the Christian religion by some... which makes it all the more fun.

Christian one - "Any game that features a religion's 'Messiah' and savior being beaten by Satan, God, or any other Biblical character as entertainment is wrong, and if this was another religion, the maker would be admonished and punished severely."

Christian two - I'm shocked!!! Just another reason why I am SOOOOOO glad we never allowed an X-box or any other gaming system into the home!! Yes, we're Christians, but I have to admit single mom , you are walking in MORE DISCERNMENT than those "christians" who thought the game was a "good idea"......

Christian TJ - Jesus fighting Moses, Mary against Eve? This is total hogwash blasphemy. It is a sign though...the true Christ is coming for His true followers.....

Christian Robert - Before a man comes to Christ, he hates the law of God: his whole soul rises up against it - "the carnal mind is emnity against God. . ."

David Niles Jr - This is Apostasy, Apostasy in the most vile form. Come Lord Jesus!

Corinne - This makes me want to cry and throw up. The goats will be more recognizeable as goats the more we as His sheep reflect the awesome glory of Jesus Christ in our lives.

Linda - This makes me want to cry. I cannot believe this is marketed as a "Christian" video game. Even the graphics look Satanic. Lord have mercy on those who created this game, who play this game, and who believe this game to be harmless fun.

Sam -It's a Flash game on the Adult Swim website. If you think this is blasphemous...well, you've obviously never watched their show "Moral Orel" to see just how far they will go in blasphemy and debasing Christian faith. I dare you to sit through one 15-minute episode without vomiting.

Nathaniel - I have seen many things in this world that are very wrong, but this takes it to an entirely new level.

Carolyn - Quite simply, that has to be one of the most blaspemous and irreverent things I have EVER seen.

Atheist - This is rediculous! You die hard Christians proclaim BLASPHEMY and qoute scripture everytime a controversial subject pops up. If he loves me so much, why should a fusion of cartoons and miniscule violence insult "him"? Video games are works of fiction. Just like God and his son.
at Saturday, August 11, 2007

If you like that game, you'll love Orphan Feast

What would Jesus do....
...
...
TOTALLLY PLAY AS HIM SELF AND BEAT DOWN SATAN IN THIS 2D FIGHTING MASTERPIECE!!! IF YOU DONT LIKE THIS GAME THEN YOU! ARENT! CHRISTIAN!!!!!

What's even worse there is a video game that requires the player to convert people to Christianity of Kill them! How horrible, vile, and disgusting!