10. "The idea that religion and politics don't mix was invented by the Devil to keep Christians from running their own country."

9. "The ACLU is to Christians what the American Nazi party is to Jews."

8. "I hope I live to see the day when, as in the early days of our country, we won't have any public schools. The churches will have taken them over again and Christians will be running them. What a happy day that will be!"

6. "Nothing will motivate conservative evangelical Christians to vote Republican in the 2008 presidential election more than a Democratic nominee named Hillary Rodham Clinton - not even a run by the devil himself ...certainly hope that Hillary is the candidate. She has $300 million so far. But I hope she's the candidate. Because nothing will energize my [constituency] like Hillary Clinton. If Lucifer ran, he wouldn't." --at a "Values Voter Summit"

5. "Grown men should not be having sex with prostitutes unless they are married to them."

4. "Billy Graham is the chief servant of Satan in America."

3. "He is purple — the gay-pride color, and his antenna is shaped like a triangle — the gay pride symbol." –from a "Parents Alert" issued in Jerry Falwell's National Liberty Journal, warning that "Tinky Winky," a character on the popular PBS children's show, "Teletubbies," may be gay

2. "You've got to kill the terrorists before the killing stops. And I'm for the president to chase them all over the world. If it takes 10 years, blow them all away in the name of the Lord."

1. "The abortionists have got to bear some burden for this because God will not be mocked. And when we destroy 40 million little innocent babies, we make God mad. I really believe that the pagans, and the abortionists, and the feminists, and the gays and the lesbians who are actively trying to make that an alternative lifestyle, the ACLU, People for the American Way -- all of them who have tried to secularize America -- I point the finger in their face and say 'you helped this happen.'" --on the 9/11 attacks. 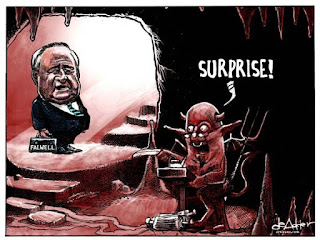 Now that was a fitting tribute! Bravo.

Excellent work. The guy had no sympathy for anyone else. Why should we have any for him just because he finally died. He even backstabbed his fellow evangelist Jim Baker by stealing his empire when he entrusted him with it during his "legal troubles".

But you forgot the numerous comments he made in the 80's about Nelson Mandela and the ANC. He called them a bunch of communist terrorists. He was against letting blacks vote because they were all communist atheists that were working with the Soviets and Cubans to turn South Africa into a communist state so they can destroy America with the help of feminists, atheists, etc.
(Source: my memory only)