Wiping our asses in Heaven 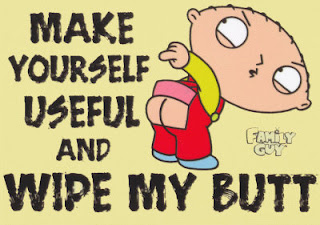 Another cut and paste I know, but believe it or not, this is exactly what I've thought through before. I'm glad it isn't just me that thinks about these things:

I’d like to talk to you about a subject that rarely sees daylight. I meant that figuratively, of course. It's something that most people do every day but almost no one talks about it among friends. Of course I'm talking about the taboo subject of… wiping. You're probably thinking there's not much to say about the subject but as I type this, I can think of so many things I want to say on the topic but let me just spotlight one of them.

The main point I'd like to make about wiping is that it is an activity that none of us can really avoid and is a daily reminder of the dirty reality in which we live. Wiping is just a bad side effect of the design of the human body and we all know who designed the human body, right? What I want to know is, why don't you ever hear a preacher do a sermon about how we’re all going to wipe our asses for all eternity once we get to Heaven?

Think about it. Paul preaches a resurrection of the dead wherein the spirit of the person is reunited with their body. Jesus rose from the dead and bodily ascended into Heaven. It's pretty clear that the New Testament teaches the notion that we will actually have physical bodies in Heaven. Now, I like a good bowel movement as much as the next guy but come on, don't tell me that I'm going to have to be wiping my ass in his presence for all eternity! I would think God has better things planned for us than the execution of mundane necessities of existence!

But this poses another question. Perhaps we don't need to eat once we get to Heaven. But if that's true, then we won't need the thirty some odd feet of intestines either. Oh, I almost forgot teeth. Won’t need those. And of course there will be no procreation allowed. So I won’t need my… um, well, heck, why WILL we need a body in Heaven?

But this is all speculation, folks.So you see, this normally taboo subject can be an interesting topic on its own but it can also lead to interesting speculation. Now if you'll excuse me, I think I feel a good bowel movement coming on. - 2007 Tim Simmons
at Tuesday, March 20, 2007

I've thought of this too!! Ha!! I always thought that if there is a "God" then one of the first things that I'd ask him is, "Why is do humans have to poop???" It's so gross and I hate having to do it.

Glad I'm not the only one thinking along these lines.

I know the apologists say that it's spiritual bodies we'd be getting and therefore we'd have no need for organic sustainance. Therefore no anus, stomach, intestines, etc. We'd just be balls of light singing and smiling in whatever way balls of light smile.

Unless of course we go to heel where organic bodies complete with nerve endings will be provided so as to feel the full pelt of firey pain... but... the bodies will be fireproof so they don't get consumed away.

Didn't Jesus eat fish with the disciples after he was resurrected?