Sweet Chocolate Jesus - this is my body, take and eat 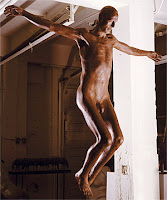 Art is art and anything that produces a reaction or an emotion can be art. Jesus has had his image modelled more times that Princess Diana was photographed, but his 'graven' image is a bit too much of a statement for some. Remember the 'Piss Christ' that caused such a furore some years ago? It like shis is a statement and it's intepretive. I think that Christ being chocolate, nude, shaved and dark are all interestingly bizarre. To mention the chocolate bar would be sacrilicious, so I won't (Mmmm Sacrilicious - Homer J. Simpson).

The "My Sweet Lord" display was shut down by the hotel that houses the Lab Gallery in midtown Manhattan, said Matt Semler, the gallery's creative director. Semler said he submitted his resignation after officials at the Roger Smith Hotel shut down the show. The six-foot sculpture was the victim of "a strong-arming from people who haven't seen the show, seen what we're doing," Semler said. "They jumped to conclusions completely contrary to our intentions."
But word of the confectionary Christ infuriated Catholics, including Egan, who described it as "a sickening display." Bill Donohue, head of the watchdog Catholic League, said it was "one of the worst assaults on Christian sensibilities ever."
The artwork was created from more than 200 pounds of milk chocolate, and features Christ with his arms outstretched as if on an invisible cross. Unlike the typical religious portrayal of Christ, the Cavallaro creation does not include a loincloth. 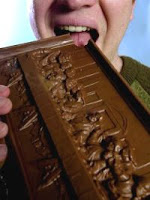 Speaking of appetite, in Pennsylvania, Jesus became the subject of a holy war over candy as chocolate lovers questioned whether they should consume bars featuring the image of the Son of God.
"I just don't think that you should eat anything that's Jesus," Liz Samuel told the Bucks County Courier Times. "It's OK to eat the cross as long as God is not on it."
Chocolatier Pamela Roberts told the paper she was reluctant at first to sell "The Last Supper" bars: "Sometimes I think it could be a sacrilege. But the nuns just love them." 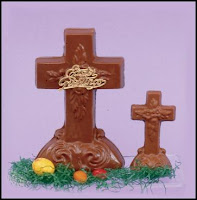 Fox News were debating - I am not making this up - if the Easter Bunny should have his name changed.They were also talking about how some people are now getting chocolate crosses in their Easter baskets.
I think the that whole idea of a giant bunny that gives chocolate eggs in the middle of the night is a little...creepy, but do christians really think that when Jesus comes back he'll want to see another cross?Isn't that about like giving the Kennedy children chocolate sniper rifles? (Link)
----Jesus Flapjacks?----