Hi Turi, thanks for your comments in the previous post. After I read it I stumbled upon the following flowcharts in an unrelated Google search. It really was a co-incidence but sums up my reply perfectly.

Turi asked what makes something believable for me? "It seems clear enough that you can't really know that the universe is chaotic and uncontrolled as a matter of fact, any more than you can know that the moon really isn't made of green cheese. It's impossible to question everything, and thus there must be something that you accept (for lack of a better term) on blind faith. "
SCIENCE 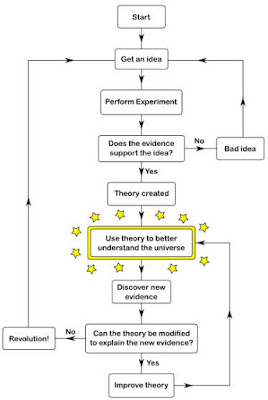 ah, flow charts... is there anything they can't do?

The flow charts are wonderful! My compliments. Everything really is clearer in pictures...

But for me it raises another question: who gets to define 'contradictory evidence'? This seems important, because nearly everyone agrees that if something is really categorically falsified according to their standards of evidence, it ceases to be true. By way of example, young-earth creationists are not by and large people who think scientific proof is meaningless, they just think their interpretation better fits the available evidence. Clearly, there are a lot of people who feel differently about the matter, but facts lying about by themselves on the side of the road can prove nothing; that is a function of argument, and arguments depend upon interpretation, which itself depends upon what you assume a priori to be true about reality. It's like Euclid: you can't do any math at all unless you start with a couple of unprovable axioms, and though you can argue about those and replace them if you like (cf. my high school geometry class - 'Ms. Michelides? I don't think this line looks straight.'), you can't eliminate them altogether.

It seems to me to boil down to your basis of knowledge: for the theist, this is of course the existence of God, and the consequent rationality of the universe. The alternative I have always supposed to be confidence, when all is said and done, in one's own intellect and powers of observation and judgement. Is that true for you, do you think?

I think a lot of creationists bend their honesty and intellectual integrity. They believe ideas outside of their rationality are evil and dangerous. It's akin to the fears Catholics had in the middle ages to question their leadership.

I think that affects their rationality severly. I've found they judge the world around them on moral and emotional grounds... and they're stoopid (basically).

I had a friend who used to speak at various churches about evolution. His theory was that we came about through a process of struggle, disease and death which wasn't good. He said that we all know God is good... therefore, we did not come about because of evolution.

He would then prattle on about a dozen stupid arguments about dinosaurs and dragons and other convoluted theories, clutching at straws and making a mockery of logic and reason (in my unlearned opinion that is).