The first rainbow? - Noah's ark is mythology and nothing more 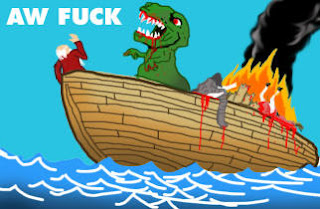 The narrative bible concerning Noah and his Ark is mythology and it's amazing to have to explain that to people.
There is a problem with the theory that a mist covered the earth until a flood that happened approximately five thousand years ago. It's painfully sad to know that Christians follop around themselves to get all this to make sense for them. What about all the countless varieties of animal/plant life that live in desert environments. Why did camels have the water storing humps if there were no deserts? and we wouldn't have had deserts or desert animals at all if the whole earth was a greenhouse with no rain. Some plants depend on fire to seed. Was there another creation of desert life three thousand years ago, after the flood, when the mists went away? No rain? It's crazy when you do the math. Rain feeds rivers and gets things flowing - it's called the water cycle. There's so much more I could say, but it's a big of a waste of time eh? We're very adapt at believing myths and legends it seems.

And was it the very first rainbow they tell us. I thought a mist would have refracted the sun's light and created many rainbows if you go with the mist theory - did the laws of refractive light and the fundamentals of physics get a do over.

There are literally thousands of animals that have been incredibly designed from the inside out to live and flourish in hot dry desert conditions (See Website). Also there are many plants that necessitate fire to sprout their seeds. Forest fires have been a normal and necessary regeneratory cycle for life... hard to have fire in a greenhouse like the one that hardline 7-day creationists believe in.

It will probably never be clear what the Genesis author had in mind when he told us the story of Noah's rainbow, but it seems likely that he meant for us to believe that the bow created by the Lord was, indeed, the very first rainbow. If it hadn't been the first rainbow, then the entire story loses its symbolic impact--even if the bow had been the best rainbow, ever. In order to explain how that rainbow could have been the first one, inerrantists must explain how water droplets in the air would not have refracted sunlight.

There are three possibilities:

The first possibility requires too many improbables: no water condensation of evaporated lake and ocean water, no waterfalls, and no rainfall. The second is just as unlikely as the first. Since God let there be light on the first day, and created the sun on the fourth, inerrantists would have to argue that there was a continual cloud cover from the time of creation until just after end of the flood. The third explanation might seem at first to be the simplest. All the inerrantist has to do to harmonize the rainbow story is assert that God must have suspended his law of refraction of electromagnetic radiation until he awarded Noah his bow in the sky.

The reason why the third explanation doesn't work is that Noah and his family would not have been able to see without refraction; all light through their eyes' lenses would pass right through to the retina without bending to a sharp focus. Noah and his family would have been living in a world filled with very blurry objects indeed, and they surely would have noticed and reported the sudden change in clarity once God had made the law of refraction operable.

Hard-line Christian fundies are one of the reasons why the world hates America. The total bereftness of logic is just astounding. Yet, fundamentalists and their lobbies help shape US policy to a frightening degree. So much so that the effects are felt here in the 3rd world.