Snakes with legs? Aren't they lizards? Do snakes eat dust still? Could all the other animals talk or was Eve surprised to see a snake with vocal chords? Snakes are built/ designed/ evolved to slither and slither they do very well. They move very fast without legs. They can swim, climb and do all sorts of stuff. They have a terrible time playing the piano though. 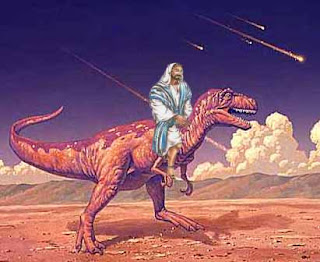 Has anyone heard of the huge Creation Museum the 'Answers in Genesis' morons are building in the states. It seems that the more we humans are progressing, the stupider many of us are becoming... which is sort of ironic because it disproves forward evolution. We can then go on to prove black is white and that white doesn't even exist and then voila the universe dissolves into a puff of logic.

What is really embarrasing to me is that Ken Ham, the guy behind this 25 million dollar waste of money, was an Australian teacher!!! He believes dinosaurs were on the ark and many were probably still alive in Jesus' time. The guy is a complete loon and has raised 25 000 000 bucks to spread the myth that the universe was created over 6 days, 6000 years ago. Oh what a fine religious goal! Don't they have hurricane ravaged states to help out? Christians are way too busy proving their doctrines rather than actually helping society in a real way. It's like those prophesy boards we used to set up in public places.

It has been set up by Ken Ham, an Australian evangelist, who runs Answers in Genesis, one of America's most prominent creationist organisations. He said that his aim was to use tourism, and the theme park's striking exhibits, to convert more people to the view that the world and its creatures, including dinosaurs, were created by God 6,000 years ago.

Converting people is the same as educating them, right? I suppose it really doesn't matter that all the evidence says the world is about 4.5 billion years old; if a few guys read the bible and say the world is a few thousand years old, it's a valid Christian counterbalance to the prevailing secular bias. Pffft...
at Friday, February 16, 2007

Email ThisBlogThis!Share to TwitterShare to FacebookShare to Pinterest
Labels: Dinosaurs, Evolution vs Creationism, Those Wacky Christians