I started doing a movie meme called 'My Cinematic Alphabet' and got through the letters A to M. When I started getting tired of messing with the clunky and cumbersome Blogspot formatting I instead decided to focus on one letter at a time. The meme rules state that one movie must be picked per letter, but I just can't. I can't. This reworked meme will also serve to actually give me something to freakin' blog about each day or so or week. Today's blog is brought to you by the letter 'N'.

My first impulse is to feature Napoleon Dynamite, because I completely love every line of that movie. It's awkward, and real, and sweet, and cringe-worthy, and is one of a kind. I'm a real sucker for coming of age movies and although I'm not sure he did 'come-of-age', it's a movie that hits me in a part of my brain that remembers being that age all to well. in fact, I think I stayed there.

The second honorable mention goes to The Notebook, because of quotes like these and how they affected my/our lives:

"The best love is the kind that awakens the soul and makes us reach for more, that plants a fire in our hearts and brings peace to our minds, and that's what you've given me. That's what I hope to give to you forever. I love you. I'll be seeing you."

"So it's not gonna be easy. It's gonna be really hard. We're gonna have to work at this every day, but I want to do that because I want you. I want all of you, for ever, you and me, every day. Will you do something for me, please? Just picture your life for me? 30 years from now, 40 years from now? What's it look like? If it's with him, go. Go! I lost you once, I think I can do it again. If I thought that's what you really wanted. But don't you take the easy way out."

A Nightmare on Elm Street

My third of four favourite movies, to the Nth degree, is A Nightmare on Elm Street. Freddy was a killer character that actually DID exist, if only in the young fertile imagination of my mind. He regularly intruded into my nightmares as a teen, and they were the sort of dreams that actually woke me up in fear, and I loved it. I'm still fascinated by dreams that can fill my head with that level of unreality and terror. The original movie was perfect and the third was great fun with the idea of the dream warriors being able to inhabit the same dream between them.

I can't really remember the fourth and fifth movies (Dream child... dunno, and no I'm not googling it right now), but I remember putting the 3D glasses on for what was supposed to be the 6th and Final Nightmare. After that, Wes Craven's New Nightmare was inventive, and Freddy vs. Jason was crossover coolness. I never saw the reboot, and don't care if I don't, but I probably will... and soon.

The final movie, and the one that is most important to me, is a little Australian movie called 'Noise,' written and directed by Matthew Saville.

The community reels after an incident on a suburban train. A young cop, beset with doubt and afflicted with tinnitus, is pitched into the chaos that follows this tragic event. He struggles to clear the noises in his head while all around him deal with the after burn of the crime.

I have a particular bias towards this film, and not just because it's VERY Australian, but because of the condition our lead character suffers with: Tinnitus. I've had chronic Tinnitus for ten years now, and it only gradually gets easier to live with. The constant high pitched shriek in my ears is like a demon that never sleeps, but whose very existence is to torment and torture me for all my living days in this world, but hey... I've got a blog for that already.

Loneliness and emptiness are states that Aussies can't help but explore. The twenty million of us live in a broad brown land with vast oceans between our neighbours, and some of them used our giant island as a prison for their unwanted citizens. There are shades of film noir in this movie accompanied by brilliant art direction and visually stunning cinematography. It is a very moving story that may leave you sadly speechless when the film ends. Warning: there may be plot holes a plenty.

Officer Graham grapples with the non-stop noise of Tinnitus in his head while manning a caravan that the public can visit and report to should they have any pertinent information to the crime. Graham is a nobody who few have respect for, and he's been kicked out of normal duty to do these late night shifts at the van. But perchance, his little van gets some shady characters that may or may not have information . How do you deal with the noise? How do you deal with people responsibly when the noise in your head frustrates you to the point where it take precedence over anything else? I've been there and it lingers.

This is a simple but brilliant film that has a lot to enjoy and will easily give you a subject for conversation afterwards, because I know, in every crowd of people there's some poor soul there, like me, with a demon in his ear. 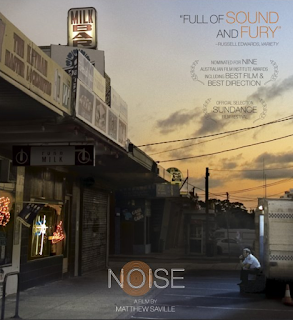