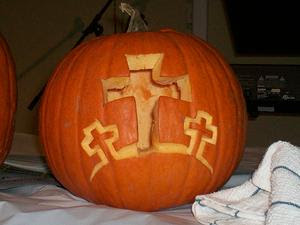 I've just sent out invitations to the students at our school for a Halloween Disco coming up, and I've already heard of some parents who won't let their children go because of the theme. Their kids are upset that they can't dance with their friends and have fun with them after a long hard year.

This is the epitome of what annoys me about some Christians. They are so full of superstition and fear that they actually go out of their way to avoid things that are so obviously unreal that it's beyond the joke. I suppose once you buy into the whole modern day Christian mythology you open yourself up to believing in all sorts of things... like witches and ghosts and demons and Yoda and The headless horseman and blah blah freaking blah.

I'm certainly not going to rename my disco or call it a fancy dress disco or any crap like that. I think that the kids who have to sit and sulk at home while their friends dance and singstar on a school night in fun costumes are learning a valuable lesson in life... and that is Christianity boxes you in a pseudo world of make-believe monsters. There's enough in this world to fear without believing in the bogey-man.

After doing a bit of an Internet search I've found that other schools have had the same problems and have even had to cancel their discos or parties because of the Christian idiocy that has some weight in their decisions. I found the following alternatives for Christians to get into as alternatives to Halloween at about.com and they're freaking funny. I wonder if Christians actually stop and think for a minute and cringe at themselves for being so 'Ned Flanderry'.

Organizing an event at your church gives children and parents a place to go and benefit from celebrating together with other families. Bible theme costumes offer an endless source of amusing choices.

The church youth can sell the pumpkins and the profits can go toward funding their next youth camp. To pump up the interest level, more pumpkin related activities can be incorporated, such as a pumpkin carving contest, a pumpkin cook-off, a carving demonstration, or even a pumpkin bake sale.

consider offering a Noah's Ark party. This can either be a church-wide event or you might consider hosting your own party for neighbors and friends. Read the Genesis account of Noah's Ark and the ideas for planning will be numerous. Food choices could follow a "pet food" or "feed store" theme.

Thinking along the same lines of evangelism, some churches even put together a "haunted house" at their church and invite the crowd inside to hear an imaginatively delivered, evangelistic message. My friend is also an artist. On Halloween she and her husband turn their front yard into a graveyard. The gravestones are engraved with Scriptures in calligraphy that provoke visitors to think about eternity and mortality.

We should have Reformation Day parties. Dress up as your favorite Reformation character, play games maybe some trivia challenges. Perhaps a re-staging of the Diet at Worms or of the debates between Luther and his critics. And the best part is that as Christians we're not hijacking a pagan holiday and trying to sanitize it. We're celebrating something that is our own and sets us apart from the secular world. It's a no-brainer to me. --Zec

Email ThisBlogThis!Share to TwitterShare to FacebookShare to Pinterest
Labels: Christmas and Easter, Deep musings of a Moth, Those Wacky Christians

the reason why xians don't let the kids out to after school activities and particularly this kind....is that they believe they are the ONLY ones who have the god given right to scare the bejesus out of their little kiddies.

Snakey: The other reason is they are afraid their children will be exposed to the truth(as most of us see it) about their silly superstitions and start to question them.
If they find out that Halloween is based on a pagan holiday coupled with an early christian feast, they might see how ridicolous religion really is!

By the way, Halloween is my favorite holiday!

Yes of course T&A I agree....shows how fragile their faith really is - christians who don't allow their kids to go to a school dances ..and be with their friends, have a bit of fun etc.

I am amazed to read Mothy's post - things like that are happening in this day & age..in Aust. Must mean there are a shit load of xians with these kinds of belief systems - so much for the 'liberal' xian being the mainstream! (this attitude is pretty backward!)

I also think part of it is 'seperatism'.. that xian parents don't want their kids to be with non xians to socialise or pick up 'bad habits' like having fun & freedom.
Yep...kids learn a lot from their peers...

I doubt the agenda of any school dance is to 'educate' kids about the origins of Halloween...to me Mothy sounds like he is just using it as a theme..not some 'atheist' big deal thing. So yeah..i see it as some xian parents beliefs about parenting. The stuff xian kids are exposed to (guilt, sin, satan, possession, all that supernatural shit)...is far more 'frightening' to a kid that some blown up ballons and masks.

... what do xians kids usually do on a friday night - but go to xian youth group. ? *sarcasm* I remember being a kid & seeing kids cry and pour out their hearts in those places...

Halloween ain't what it used to be, either. Back in my day, back in the 90's, when I was young, Halloween used to be scary. I'm talking about the effort that was placed into the decorations and whatnot outside and inside the houses.

Now, it's so kiddy that adults such as myself don't feel like celebrating it anymore. Thank you, Christian zealotry, for ruining my favorite holiday.

I still remember going out, dressed as an undead soldier, and scaring the crap out of little kids. And adults.

And still, this year I intend to go out, dressed in all black airsoft gear, and scare more people in town.

My parents TRIED to stop me from going out when I was younger, but those Lutherans are strong in principle, weak in practice.

I posted an article about halloween on my site and received several interesting comments. See http://tinyurl.com/ypd2ck

Here's one for the books:
I work with a guy who's an ordained minister as well as a
convicted pedophile!!

About a month ago,he was telling me at lunch how his Sunday School Lesson
was about the"Evils of Haloween!!".

First of all,I'm Scots-Irish and Samhain-'Soween'aka'Halloween'-was an old celtic custom!!

Sure they mighta got drunk and danced around a bonfire,but that's about as evil as it got!!
FYI:I wasn't there so I can't tell you personally as I didn't come around until 1959!!

However,if any of my ancestors did do something evil,I'm sorry!!

Secondly,that's kinda like the pot calling the kettle black!!
A convicted sex offender telling about how'Halloween is Evil!!'.

Sorry,but I think God'll send a pedophile to Hell faster than he will some 5 year old who dresses up like Iron Man!!