In the name of the Google, the Blogger, and the holy Gmail

I've always been a follower. I don't really see myself as having good leadership qualities, but for some strange reason I keep getting myself into leadership positions. I'd prefer to follow blindly, but I've come to realise that doing so only rips the bloody veins out of my arms so they can be pulled on 'puppet-style' by the people who do see themselves as leaders (Ala Nightmare on Elm st III - and an interesting visual it was).

I'll tell you what I do follow blindly, and with naive child-like faith. Please allow me to give some praise and worship to... Google. Ahh, Google, sweet Google, your simple white screen splashed ever so lightly with a large, friendly, primary coloured, serif fonted title is sheer minimalist beauty. With almost limitless space available, I don't care if my computer crashes... just about everything I hold important is stored at g-mail, Picasa or blogspot. Google things I love.
Speaking of blogspot, I've just about finished tinkering with this site. I keep finding cool new widgets to add to the right panel and I'm finding it difficult to stop adding in more things that clutter it up (sorry if you use dial-up). There's my father in me - he can't stop tinkering... he tinkers with stuff until they get too ugly to look at or too crammed to use. I hate having that passed onto me. I've even let Google put some advertising on the blog because they deserve it (ha) but it's sort of ironic because they put advertisements to churches and christian things. I won't question the wisdom of Google.

I better do some personal blogging rather than cut and pasting stuff from other sites. That's far too easy, but I did want to throw Douglas Adam's interview here because I'm a huge fan. As for chocolate Jesus; well, I collated those three stories into one and the formatting too AGES, therefore I will claim some ownership. I'm a huge fan of chocolate too; all I need now is a chocolate Hitchhiker's guide. See the links in the RSS feeds to see all the stuff I wanted to cut and paste here but didn't.

So now here I am just having finished building my Google field of dreams and am waiting for customers to leave comments of abuse, love and indifference. I started this blog because I used to sprinkle all these sort of thoughts into my regular family blog, but that just made it overly messy and as Jo said, "no one wants to hear that crap", so I put the crap no one wants to read here instead. I've spent my whole life being religious and I seem to be spending a large part of it now being specifically non-religious. Easter's on us now and I'm just happy that it's all about the chocolate for me... and not about the Roman crucifixion torture story. 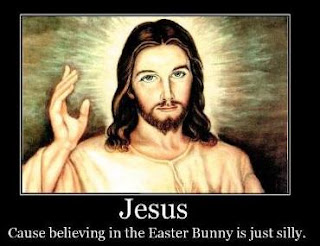 Email ThisBlogThis!Share to TwitterShare to FacebookShare to Pinterest
Labels: Deep musings of a Moth, Funny Blogging

Ah yes, Easter. The day that Christians celebrate a schizophrenic who "magically disappeared" to join his invisible father in the sky.

Of course we know all of this thanks to the Gospel of the Easter Bunny.

Jesus was the originalCriss Angel.

As a fellow Schizophrenic I plan on not taking my meds and celebrating Easter by doing magic tricks and calling them "miracles."

As for Google? I'm their bitch. I lust after all of their products and services. I heard they are a great employer as well. I do need to switch over to gmail--I have an account I've just been too lazy to make the move. I'm using hellmail right now--Oops, I mean hotmail.

I also love to add widgets to my blogs. I'm such an html nerd.

They call him James Ure said...

Calling the theological giant’s stranglehold on the religious industry “blatantly anticompetitive” a U.S. district judge has ruled that God is in violation of antimonopoly laws and ordered Him to be broken up into several less powerful deities. . .[Said the judge,] “He has carved out for Himself an illegal monotheopoly.” Leading theologians are applauding the God break-up, saying that it will usher in a new era of greater worshipping options, increased efficiency, and more personalized service.

(This is James of the Letters from the Sanitarium).