Jesus loves me, but I just wanted to be friends 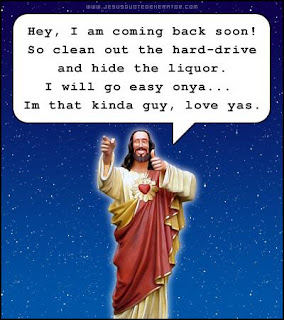 I think a true (or at least decent) religion is meant to be one that focuses on relationships; relationships with each other (for as much as ye have done unto each other you do it to Jesus etc). I can relate with some people but it takes years of practice to tolerate, respect and like others in order to build a relationship. That's the really tricky part. Some tongue-fixated churches believe that the ability to speak in tongues defines a Christian; I'm sure your mainstream Christian is sickened by the insinuation.

The ability to respect each other and *shock* care for each other is what JC wanted them to do. They're too busy shunning those who don't agree with them, or avoiding those with different socio-economic classes, or just being too damn selfish to regard other people at all.

I can't relate to Jesus. I'm not perfect; I don't do carpentry or stone cutting; I was never crucified; He often doesn't answer prayer; He never talks back to me verbally. I don't believe that all the little whisperings in my head are coded messages from the spirit or what have you. They are my own logical reasonings and my own ethical conscious thoughts.

"My pastor told me to listen for the still small voice of God in my heart, but my shrink told me to never listen to any of the voices, no matter how small or still they may be."

But yeah I dig what it says about putting the kingdom first, and that's all the other cats down here on earth.. not yourself. It's a simple and nice message. Their problems is the continual nagging to have a relationship with Jesus. Just accentuating his name and repeating it all the time does not a Christian make (making a big deal out of his name is a Jehovah Witness mentality); Jeezusss... GeeeZuss... repeating those syllables is as miraculous as random glossalalia). Nor does the secret tongue-shake a Christian make! I can see virtue in treating people in the the same way you would want to be and it seems that Jesus was saying, "Hey, forget about being groovy to me, be groovy to each other."

A person who is nice to you but rude to a waiter is not a nice person. (This is very important. Pay attention. It never fails.) - Dave Barry

Email ThisBlogThis!Share to TwitterShare to FacebookShare to Pinterest
Labels: Deep musings of a Moth, Strange Jesus

right on! ex-christian here! it is all so silly, just psychological enslavery! glad to have come across your page :-)