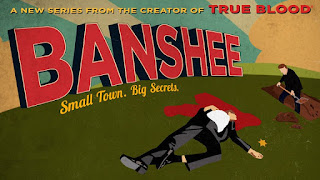 This is a great time of the year for binge television viewing and this short season series is the perfect show to do it with if you love yourself some high adrenalin action.

Lucas Hood (Antony Starr) is a recently paroled ex-con who assumes the identity of a small town's new sheriff. He's a brooding tough guy who brings to this quiet town huge lashings of cinema quality sex and violence; both quite graphic. It's not a series for the faint-hearted. Each episode has at least two well choreographed action sequences the likes not usually seen on television. You have to suspend your belief and enjoy the unlikely scenarios that come with the premise, because he seems to have almost Rambo/Terminator abilities. Movie viewers are conditioned to seeing someone shot, stabbed and beaten get up and still throw down.

Three seasons have aired and a fourth and final will air in 2016. They each contain 8-10 episodes, preferring quality over quantity and the producers don't want to 'milk' it by stretching it out beyond four seasons. It's lewd, gory, offensive, eccentric and full of machismo, and it knows it. It's damn entertaining.

Rating : 8/10 - There are many 'action' television series, but it's rare to see action of this calibre on the small screen
at Sunday, December 27, 2015