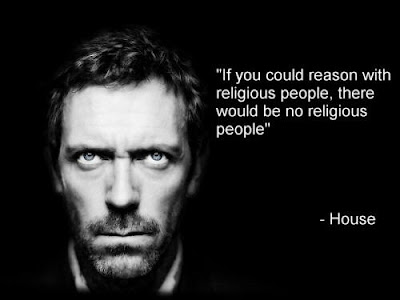 I tend to agree, religious people are a special case of delusion. However, I also believe we are all technically delusional. We tend to trust our own mind rather than the mind of others. In my blog I recently gave an analogy of a newly admitted patient in an insane asylum pleading with the doctor to let her go because she was placed in there as part of a conspiracy. Naturally, the doctor will assume nine out of ten times that the patient is insane and absolutely belongs there. However, can the doctor be so sure? Furthermore, if you really wanted to take it to the limits, how can the doctor even be certain that he isn't a patient in an insane asylum having a delusion about being the doctor? Reality is a very fragile thing, we often take it for granted that we can be confident in anything. But to be fair, the religious, especially Abrahamic faiths, tend to do so more than others. They are often the bane of logic and sensibility.

Mothrust, what is the best way to go about contacting you so we can discuss some ideas?

What ideas are you thinking about?

heck... it's only been nearly a year since you posted :S