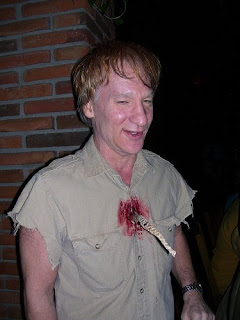 Via Aintitcoolnews.com: Now, before seeing this film, I must say that I thought I knew exactly what I was going to see: Larry Charles setting up incompetent people in ordinary situations, only to have them met by an relentless force (Bill Maher) that takes them out of their element and reduces them to bumbling idiots - a la “Borat”. Taking into account the trailers that I’d seen online, and the extended preview that Charles played last year at the festival (he is also a board member), I was absolutely certain that it would be a religious take on “Borat”. To my surprise, this was not the case. It was actually something much more, and at times far more serious than comical. Sure, the film does set people up in hopes that they will fall or dig themselves a grave. But on the contrary, Maher does not victimize anyone. In actuality, he affords everyone he speaks with the upper hand: their faith. In the end, many of them do fall, and in some cases pretty hard, which all provides for the comedy of the film. My personal favorite is a teen patron of Holyland who immediately jumps on the chance to compare the birth of Christ to Anakin Skywalker in Episode 1. Remarkably though, no matter how far Maher displaces these individuals from logical thought, all remain adamant that what they believe is right… no matter how silly it may seem even to themselves, or to the rest of the world.

Now before I get to my overall take on the film, I feel I must preface by stating my own beliefs, as I think most future reviewers of this film will intentionally or unknowingly do so. Perhaps it comes with the territory, or perhaps it’s because there is some sort of validity in balancing one’s reaction to his/her religious background. If this is the case, I’ll say that my own beliefs are a bit scattered. I was born and raised Catholic. Once I became a teen though, I immediately started distancing myself from the church as doubt (which all of us bear at some point) caused me to disagree with the faith. Today, I cannot consider myself a “believer” or “non-believer”. I simply feel that organization of religion merely gets in the way of what is important and that the messages which are meant to find us are often lost somewhere in the fine print. Now I don’t mean to preach, but in a sense, I am the very type of person that this film targets. Someone in between. That is, someone who is willing to criticize the absurdities of organized religion, but also someone unable to concede to a godless universe. What can I say? I have my doubts.

”Religulous” navigates this grey area of doubt quite well, and uses the fine print (which apparently no one really reads) merely as a starting point for conversation. What results from this conversation, are some pretty damn good questions that really all people should consider; of faith, or not. Oddly enough, not all these questions are necessarily confined to religion. Because of this, I feel ”Religulous” is a far more intelligent and balanced film than it presents itself to be.

It’s a “think piece”… in many ways. Granted, there are a few times where the balance gets lost by Maher, as he himself begins to preach. Nevertheless, he does a pretty good job at restraining himself when he needs to. He also does a damn good job at winding his subjects up. Of course, the true fun comes when he just sits back and lets them go. All in all, I must say that I really enjoyed the film. If you are like me and go into this film expecting another “Borat”, you are either going to get more or less than what you bargained for, all depending on your perspective of religion (obviously). I will also say though, that if you are looking to be offended, the odds are pretty good.

I guess you can call me a “believer”, because I really liked “Religulous”!

On a distracting side-note: After the screening, as Larry Charles began fielding questions from the audience, he noted that there are over 14 additional hours of refined footage of the film that may or may not be converted into a TV series (HBO?). However, he said it would all be dependent on how the film performs in its fall release. Perhaps as a joke, or to assert a personal prediction, Charles asked audience members to raise their hands if they were a “believer” of some form of religion. He then asked the “non-believers” to raise their hands. Surprisingly, there were more “believers” in the audience.

I'm so excited to see this flick.

Nice review. I have been interested in this film since I first heard about it (maybe February) and have heard little about it. I can't wait to see it come out (more to see how the news spins it!).

A movie that laughs directly at Christianity! Heck, we need this movie if only to balance out the Passion, Narnia series, Expelled, and Clerks 2 ('cause you know the donkey scene was full of christian allegories).

I'm sure Ray Comfort and Smirk Cameron will do a parody movie where they pick on and laugh at atheists, but that'll be funny too. As long as he brings the banana and shows us the actual part of his body where it 'would' fit snuggly.

I loved your blog. Thank you.