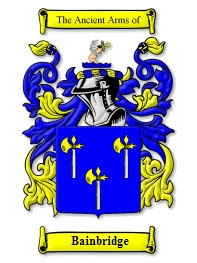 This is an English locational name from the place so called in the parish of Aysgarth in North Yorkshire, which stands on the River Bain. The derivation of the river name is from the Old Norse word "beinn" and the Old English pre 7th Century "brycg", meaning "bridge". There is some doubt about the exact meaning of "beinn", it is usually taken to mean "straight", but also in a transferred sense, can mean "handy" or "direct", and thence "helpful". The sense would easily apply to a convenient bridge across a river, of course. Locational names were often given to those people who left their original place of residence in this instances by the direct bridge across the river, and went to live or work in another village or town. The first recorded spelling of the family name is shown to be that of Matilda de Baynbrigg. which was dated 1301, Subsidy Rolls of Yorkshire. during the reign of King Edward I, The Hammer of the Scots, 1272 - 1307. Surnames became necessary when governments introduced personal taxation. In England this was known as Poll Tax. Throughout the centuries, surnames in every country have continued to "develop" often leading to astonishing variants of the original spelling.
at Thursday, August 02, 2007

Email ThisBlogThis!Share to TwitterShare to FacebookShare to Pinterest
Labels: meme