According to him he is. Secretly leaked indoctrination video of Tom Cruise explaining to new Scientology suckershow he/they will rule the world. Scientologists have been pulling this off Youtube faster than you can say Dianetics but you can find it here. It's quite a show! I hadn't sort of noticed how big a dickhead he was; I chose to think of him more as a rich eccentric with some illusions of gradeur, but after seeing this video there's no doubt... he's a complete tosser.

Cruise’s remarks come off instead disturbingly weird and alternate between meaningless anagrams and wildly delusional boasts, with the transitions mediated by violent spasms of laughter. A typical passage: “So, for me, it really is KSW [Keeping Scientology Working], and it’s just like, it’s something that, uh, I don’t mince words with that” — followed by: “Being a Scientologist, when you drive past an accident, it’s not like anyone else. As you drive past, you know you have to do something about it, because you know you’re the only one that can really help.”

Surely he's not implying that an ambulance couldn't help? Is he? What the...? As a christian, I used to think along these lines. I had a warped belief that my particular Christian sect was far superior to others and that helpless 'car accident victims' and the like could only be properly looked after by my healing channels with God, and my ability to preach them the Holy Truth that would continue to improve their life after they had been healed and made whole.


Who the hell is the voice over guy... and how do you take that seriously?
This clip shows a lot more of the fucked up scientologists:
Actors Being Crazy
Uploaded by WillyShatner 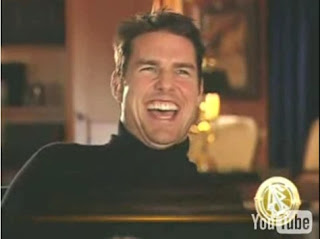 He's a psycho. Those crazy, paranoid eyes. Freaky!! I felt like he was trying to hypnotize me. And what was with speaking in generalities and code words? And we supposed to believe it's NOT a cult???

No wonder he is anti-medicine for psychological conditions. It appears as though he has plenty of mental problems and does not want to accept that reality. He's unhinged.

Yep..I saw that Cruise segment on Brisbane TV the other week.

Did you know Cate Cerbrano is also into scientolgy?
Well...if you are going to believe in shit..you might as well go all out and believe in really weird - spacey fantasy?

The only thing scarier than Tom Cruise is Scientology. Add the two together and its super eeky.

I just don't get it. By all accounts you'd think he was an intelligent man, so wtf? Tom Cruise is, imo, the living embodiment of the phrase wtf. You can see it labelled across his forehead like those old Bloody Idiot drink driving ads.

Speaking of which... "helpless 'car accident victims and the like could only be properly looked after by my healing channels with God, etc"... one of the funniest things I've read today.

I can so easily imagine the christian moth driving past a car accident and stopping to place a bible and his phone number on the dashboard of the dying person's car, then driving off. Maybe lining his kids up for a quick prayer first.

I wish I had of met that version of moth. I would have had such a fun time poking fun at him lol.

Wait. What am I saying. Sif I don't anyway.

Ever wonder how come scientology seems to attrack the rich and famous?


P.s. I'm having one of those days where the more I look at a word the less it makes sense how to spell it!