An Evolutionary Theory of Right and Wrong 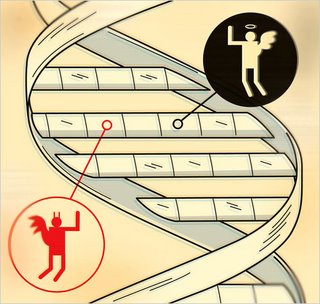 Who doesn’t know the difference between right and wrong? Yet that essential knowledge, generally assumed to come from parental teaching or religious or legal instruction, could turn out to have a quite different origin.

Primatologists like Frans de Waal have long argued that the roots of human morality are evident in social animals like apes and monkeys. The animals’ feelings of empathy and expectations of reciprocity are essential behaviors for mammalian group living and can be regarded as a counterpart of human morality.

Marc D. Hauser, a Harvard biologist, has built on this idea to propose that people are born with a moral grammar wired into their neural circuits by evolution. In a new book, “Moral Minds” (HarperCollins 2006), he argues that the grammar generates instant moral judgments which, in part because of the quick decisions that must be made in life-or-death situations, are inaccessible to the conscious mind.
. . . .
The proposal, if true, would have far-reaching consequences. It implies that parents and teachers are not teaching children the rules of correct behavior from scratch but are, at best, giving shape to an innate behavior. And it suggests that religions are not the source of moral codes but, rather, social enforcers of instinctive moral behavior

Email ThisBlogThis!Share to TwitterShare to FacebookShare to Pinterest
Labels: Morality and ethics

Cheerio. I find your blog interesting. That article certainly was. Of course this evolutionary morality is descriptive, and as such not morality at all, properly speaking - is and ought and all of that.
The other thing was Dr Hauser's curious contention that 'the system... that generates moral judgements is immune to religious doctrine'. That was not especially scientific of him. But no-one is perfect, and I'm sure he is a fine biologist.