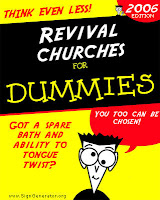 Some of my blogs are in particular reference to a select group of deluded fundamentalists who have a particular fetish for glossolalia (speaking in tongues). They're the ones who got me.
The man-made gospel of speaking in tongues, being the primary indicator for salvation, has been passing on from various churches for half a century now. These followers believe that anyone who calls themselves Christians, but cannot perform the act, is fooling themselves and whoever they talk to. Non-speaking Christians aren't even second-class citizens to them... in fact, they're not even Christians at all, according to their bible interpretation. They think very little of the 'fake' Christians and even less of the worldlys whom they do endeavor to save with their select gospel.

The argument is convincing and the scriptures dovetail quite nicely when tweaked accordingly. Initiation and approval is given via a random rambling drawl and it is exchanged at every meeting, much like a secret handshake. However, this thread is not a debate on tongues but rather an expose on the churches (no matter how big or small) who are similar to Revival or who have broken off from them without discarding the tongues fixation. Most of these churches don't communicate with each other but do nod politely in their direction when it's acknowledged that, 'at least they have tongues'.